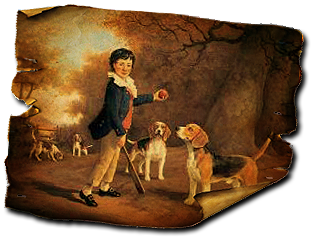 Dogs of similar size and purpose to the modern Beagle can be traced in Ancient Greece back to around the 5th century BC. Xenophon, born around 430 BC, in his Treatise on Hunting or Cynegeticus refers to a hound that hunted hares by scent and was followed on foot. Small hounds are mentioned in the Forest Laws of Canute which exempted them from the ordinance which commanded that all dogs capable of running down a stag should have one foot mutilated. If genuine, these laws would confirm that beagle-type dogs were present in England before 1016, but it is likely the laws were written in the Middle Ages to give a sense of antiquity and tradition to Forest Law.

In the 11th century, William the Conqueror brought the Talbot hound to Britain. The Talbot was a predominantly white, slow, deep-throated, scent hound derived from the St. Hubert Hound which had been developed in the 8th century. At some point the English Talbots were crossed with Greyhounds to give them an extra turn of speed. Long extinct, the Talbot strain probably gave rise to the Southern Hound which, in turn, is thought to be an ancestor of the modern-day Beagle.

From medieval times, beagle was used as a generic description for the smaller hounds, though these dogs differed considerably from the modern breed. Miniature breeds of beagle-type dogs were known from the times of Edward II and Henry VII, who both had packs of Glove Beagles, so named since they were small enough to fit on a glove, and Queen Elizabeth I kept a breed known as a Pocket Beagle, which stood 8 to 9 inches (20 to 23 cm) at the shoulder. Small enough to fit in a "pocket" or saddlebag, they rode along on the hunt. The larger hounds would run the prey to ground, then the hunters would release the small dogs to continue the chase through underbrush. Elizabeth I referred to the dogs as her singing beagles and often entertained guests at her royal table by letting her Pocket Beagles cavort amid their plates and cups. 19th-century sources refer to these breeds interchangeably and it is possible that the two names refer to the same small variety. In George Jesse's Researches into the History of the British Dog from 1866, the early 17th-century poet and writer Gervase Markham is quoted referring to the Beagle as small enough to sit on a man's hand and to the:

little small mitten-beagle, which may be companion for a ladies kirtle, and in the field will run as cunningly as any hound whatere, only their musick is very small like reeds.

Standards for the Pocket Beagle were drawn up as late as 1901; these genetic lines are now extinct, although modern breeders have attempted to recreate the variety. 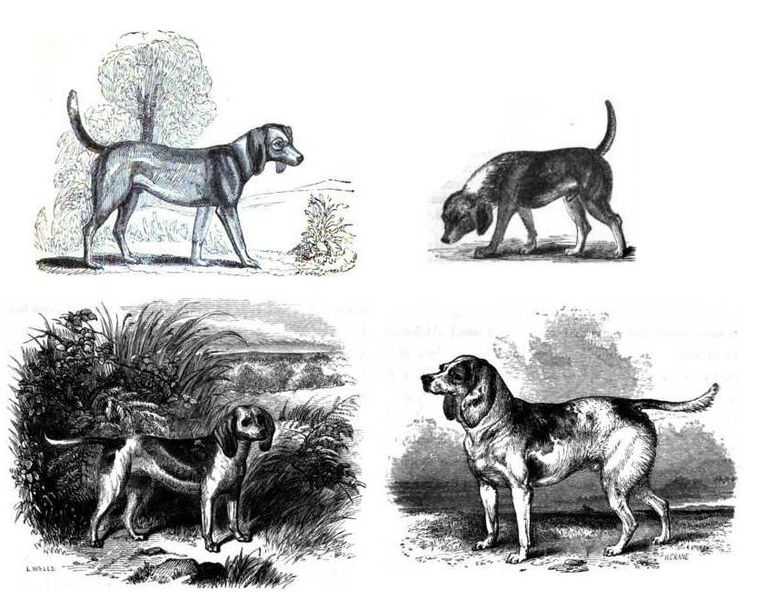 By the 18th century two breeds had been developed for hunting hare and rabbit: the Southern Hound and the North Country Beagle (or Northern Hound). The Southern Hound, a tall, heavy dog with a square head, and long, soft ears, was common from south of the River Trent and probably closely related to the Talbot Hound. Though slow, it had stamina and an excellent scenting ability. The North Country Beagle, possibly a cross between an offshoot of the Talbot stock and a Greyhound, was bred chiefly in Yorkshire and was common in the northern counties. It was smaller than the Southern Hound, less heavy-set and with a more pointed muzzle. It was faster than its southern counterpart but its scenting abilities were less well developed. As fox hunting became increasingly popular, numbers of both types of hound diminished. The beagle-type dogs were crossed with larger breeds such as Stag Hounds to produce the modern Foxhound. The beagle-size varieties came close to extinction but some farmers in the South ensured the survival of the prototype breeds by maintaining small rabbit-hunting packs.

Reverend Phillip Honeywood established a Beagle pack in Essex in the 1830s and it is believed that this pack formed the basis for the modern Beagle breed. Although details of the pack's lineage are not recorded it is thought that North Country Beagles and Southern Hounds were strongly represented; William Youatt suspected that Harriers formed a good majority of the Beagle's bloodline, but the origin of the Harrier is itself obscure.[10] Honeywood's Beagles were small, standing at about 10 inches (25 cm) at the shoulder, and pure white according to John Mills (writing in The Sportsman's Library in 1845). Prince Albert and Lord Winterton also had Beagle packs around this time, and royal favour no doubt led to some revival of interest in the breed, but Honeywood's pack was regarded as the finest of the three.

Although credited with the development of the modern breed, Honeywood concentrated on producing dogs for hunting and it was left to Thomas Johnson to refine the breeding to produce dogs that were both attractive and capable hunters. Two strains were developed: the rough- and smooth-coated varieties. The rough-coated Beagle survived until the beginning of the 20th century, 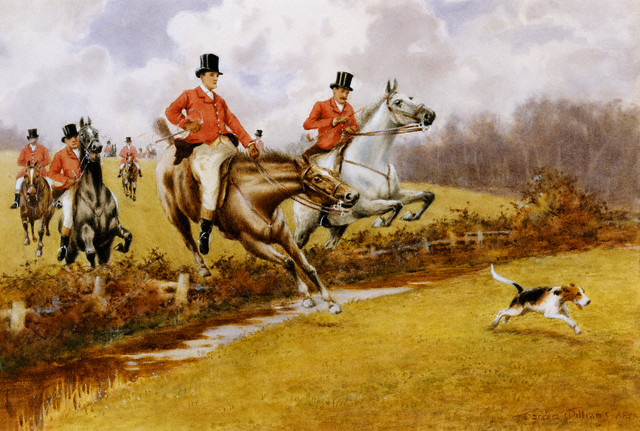 and there were even records of one making an appearance at a dog show as late as 1969, but this variety is now extinct, having probably been absorbed into the standard Beagle bloodline.

In the 1840s, a standard Beagle type was beginning to develop; the distinction between the North Country Beagle and Southern Hound had been lost, but there was still a large variation in size, character, and reliability among the emerging packs. In 1856, "Stonehenge" (the pseudonym of John Henry Walsh), writing in the Manual of British Rural Sports, was still dividing Beagles into four varieties: the medium Beagle; the dwarf or lapdog Beagle; the fox Beagle (a smaller, slower version of the Foxhound); and the rough-coated or terrier Beagle, which he classified as a cross between any of the other varieties

and one of the Scottish terrier breeds. Stonehenge also gives the start of a standard description:

In size the beagle measures from 10 inches, or even less, to 15. In shape they resemble the old southern hound in miniature, but with more neatness and beauty; and they also resemble that hound in style of hunting.

By 1887 the threat of extinction was on the wane: there were 18 Beagle packs in England. The Beagle Club was formed in 1890 and the first standard drawn up at the same time. The following year the Association of Masters of Harriers and Beagles was formed. Both organisations aimed to further the best interests of the breed, and both were keen to produce a standard type of Beagle. By 1902, the number of packs had risen to 44.

Beagles were in the United States by the 1840s at the latest, but the first dogs were imported strictly for hunting and were of variable quality. Since Honeywood had only started breeding in the 1830s, it is unlikely these dogs were representative of the modern breed and the description of them as looking like straight-legged Dachshunds with weak heads has little resemblance to the standard. Serious attempts at establishing a quality bloodline began in the early 1870s when General Richard Rowett from Illinois imported some dogs from England and began breeding. Rowett's Beagles are believed to have formed the models for the first American standard, drawn up by Rowett, L. H. Twadell, and Norman Ellmore in 1887. The Beagle was accepted as a breed by the American Kennel Club (AKC) in 1885. In the 20th century the breed has spread worldwide. 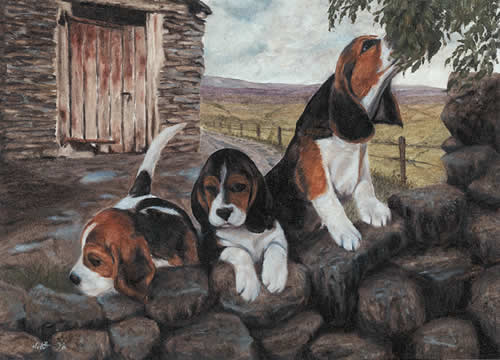 On its formation, the Association of Masters of Harriers and Beagles took over the running of a regular show at Peterborough that had started in 1889, and the Beagle Club in the UK held its first show in 1896. The regular showing of the breed led to the development of a uniform type, and the Beagle continued to prove a success up until the outbreak of World War I when all shows were suspended. After the war, the breed was again struggling for survival in the UK: the last of the Pocket Beagles was probably lost during this time, and registrations fell to an all-time low. A few breeders (notably Reynalton Kennels) managed to revive interest in the dog and by World War II, the breed was once again doing well. Registrations dropped again after the end of the war but almost immediately recovered.

As purebred dogs, Beagles have always been more popular in the United States and Canada than in their native country England. The National Beagle Club of America was formed in 1888 and by 1901 a Beagle had won a Best in Show title. As in the UK, activity during World War I was minimal, but the breed showed a much stronger revival in the U.S. when hostilities ceased. In 1928 it won a number of prizes at the Westminster Kennel Club's show and by 1939 a Beagle – Champion Meadowlark Draughtsman – had captured the title of top-winning American-bred dog for the year. On 12 February 2008, a Beagle, K-Run's Park Me In First (Uno), won the Best In Show category at the Westminster Kennel Club show for the first time in the competition's history. In North America they have been consistently in the top-ten most-popular breeds for over 30 years. From 1953 to 1959 the Beagle was ranked No. 1 on the list of the American Kennel Club's registered breeds; in 2005 and 2006 it ranked 5th out of the 155 breeds registered. In the UK they are not quite so popular, placing 28th and 30th in the rankings of registrations with the Kennel Club in 2005 and 2006 respectively. In the United States the Beagle ranked 4th most popular breed in 2012 and 2013, behind the Labrador Retriever (#1), German Shepherd (#2) and Golden Retriever (#3) breeds.

According to the Oxford English Dictionary, the first mention of the beagle by name in English literature dates from ca. 1475 in the Esquire of Low Degree. The origin of the word "beagle" is uncertain, although it has been suggested that the word derives from the French begueule (meaning "open throat" from bayer "open wide" and gueule"mouth") or from an Old English, French, or the Gaelic word beag, meaning "little." Other possibilities include the French beugler (meaning "to bellow") and the Germanbegele (meaning "to scold").

It is not known why the black and tan Kerry Beagle, present in Ireland since Celtic times, has the beagle description, since at 22 to 24 inches (56 to 61 cm) it is significantly taller than the modern day Beagle, and in earlier times was even larger. Some writers suggest that the Beagle's scenting ability may have come from cross-breeding earlier strains with the Kerry Beagle. Originally used for hunting stags, it is today used for hare and drag hunting. 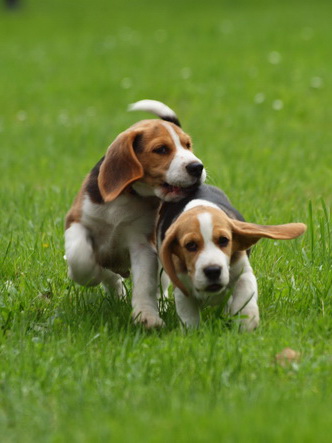 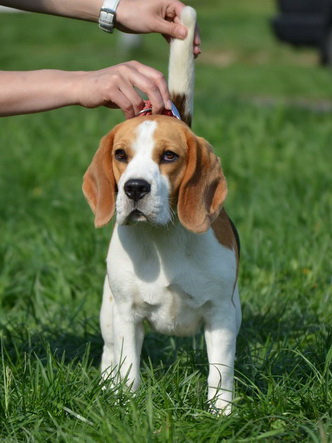